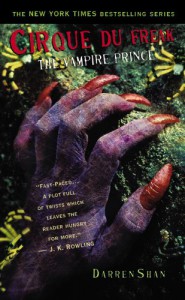 This is the first book in this series where I'm actually questioning how I feel about it.
Kurda was executed because he took the wrong path in trying to aid the vampires. He was truly trying to save his race. He may have screwed but, but they'll never know because they acted rashly and wouldn't listen to him.
Darren failed the trials- punishable by death- then fled execution -double punishable by death- and is still made a Prince, the position that Kurda should have held.
I think Kurda should have at least been pardoned and sent off. Or just went to love with the Vampaneze. It's not like any vampire would ever trust him again, so what could he do.
Also, I don't think that Darren should have been made a Prince. He isn't even a full vampire. I get that they wanted him to avoid shame and still keep their laws intact, but he just hasn't earned it. It's not fair
My favorite part about this was the wolves. I love how they communicate and how they work together. Magda was my favorite "character" through the book. She knew the trek would kill her, but she did it anyway. She was sweet.
I think it was a tad odd that Darren drank from a wolf mother. That's just weird. Breastfeeding is one thing, but inter-species breastfeeding is entirely different.