Cross My Heart and Hope to Spy- 3.5 Stars 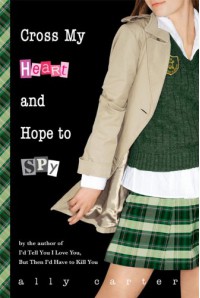 Title: Cross My Heart and Hope to Spy

Better than the first one for me. It may have been more action or possibly just that this is the second book in the series so we don't have to go through introductions with each character, but this one definitely had more to it than the first book.

Most the same characters with the addition of some boys from Blackthorne, mostly Zach. I think he was a great addition. I like him way more than Josh, and hope he pops up further in the series. He's funnier and more confident, plus he is a spy, which makes a completely different dynamic for Cammie because they have something in common that is obviously very important to them.

A great deal more action in this one, which I really appreciate. There are definitely more secrets, both revealed and brought up to investigate further. Cammie seems to do more actual spy work in this one instead of focusing so much on boys, mostly Josh, like she did in the first book. So grateful for that. We actually get to see what she is working so hard toward rather than her boyfriend.